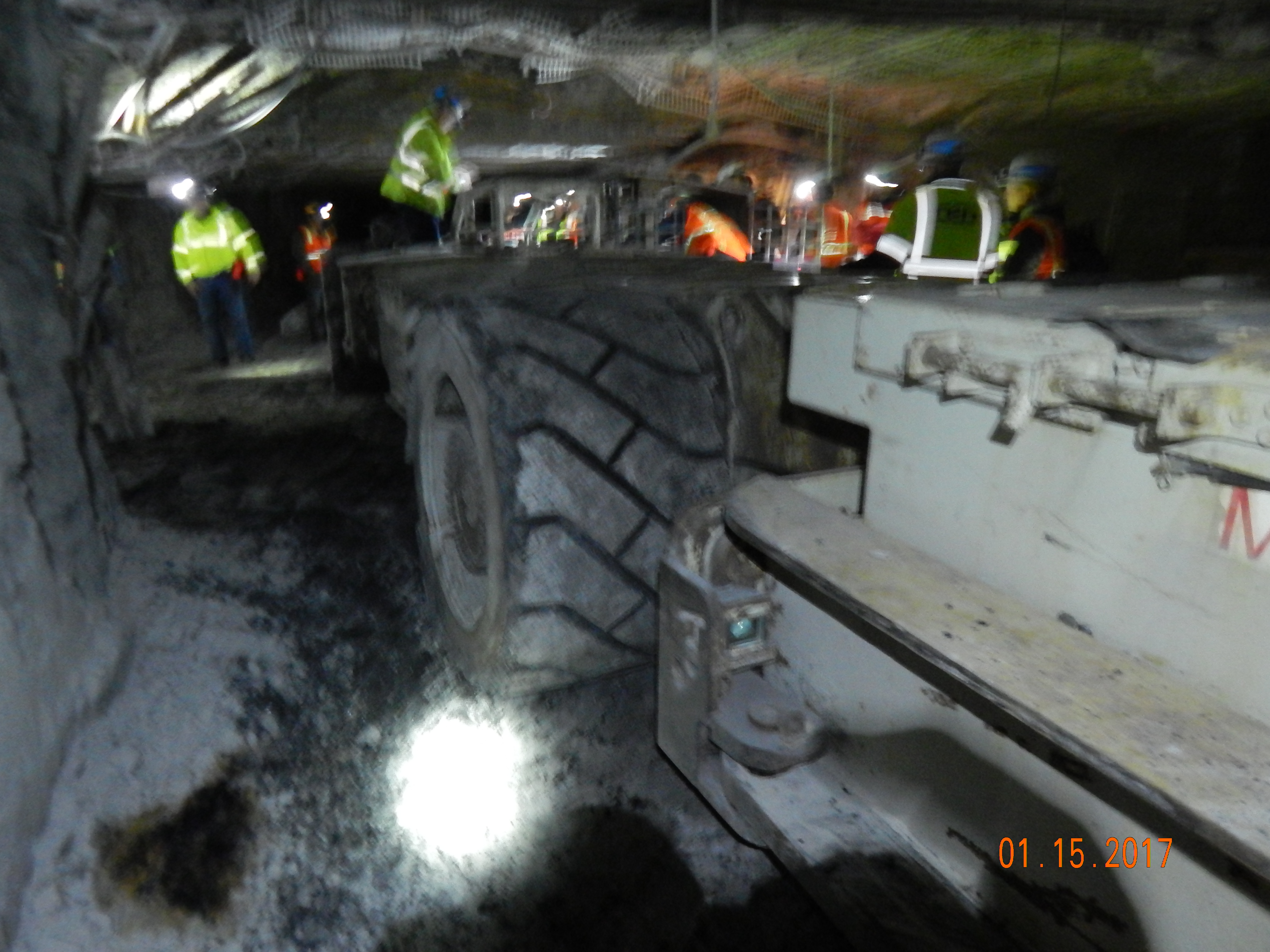 Mine safety and health and environmental expert Jack Spadaro has dedicated his life to improving health and safety conditions in mines throughout the United States. He is among the nation's leading experts in mine health and safety and the environmental hazards related to mining. Jack was a young engineer when he was involved in the investigations of the Farmington and Buffalo Creek mining disasters. He has since spent nearly 55 years in public service, developing and enforcing guidelines to protect miners and their communities from life-threatening safety and environmental hazards.

I provide consulting services and expert witness services to attorneys, labor unions, companies, and organizations involving the health and safety of miners in surface and underground coal and metal/non-metal mines and mineral processing facilities on a national basis. I also provide consulting services regarding storm water runoff and surface and underground mine environmental conditions related to water quality, ground water systems, mine waste and tailings areas, surface drainage control facilities, and stability of coal refuse dams, mine tailings areas, and valley fills.
I provide expertise in the application of the Mine Safety and Health Act to clients needing advice and knowledge of the federal regulations and industry standards related to mine worker health and safety. I also provide services regarding the Federal Surface Mining Control and Reclamation Act (SMCRA) and the Clean Water Act. I have testified in state courts regarding flooding and storm water runoff related to surface mining operations, gas and oil well construction sites, housing developments, highway construction, valley fills, landslides, dams, mining waste areas, and drainage control structures.
More About Jack Spadaro

I provide expert witness services related to mining accidents and the mining environment at coal mines and metal / non-metal mines. I have served as an expert witness in litigation related to the Mine Safety and Health Act and SMCRA from 2004 to the present time. The expertise is related to surface and underground haulage accidents, roof and rib control, ventilation, exposure of workers to hazardous chemicals, mine tailings areas, respirable mine dust exposure, use of dust masks and respirators, stability of dumping sites, safety of road gradients, explosions, surface and underground transportation, crushers and processing plant safety, and the overall mine work environment. I have served as an expert witness in cases related to storm water runoff from surface mines and gas well construction sites and pipeline construction. I have served as an expert witness in complex litigation involving multiple plaintiffs and have served as an expert witness in federal and state courts. The testimony required extensive knowledge of mining and the mine environment and a thorough knowledge of both federal and state mine health and safety regulations and environmental regulations related to water quality and storm water runoff control. I have been involved in litigation involving flooding and the stability of coal waste impoundments and surface mine waste fills. I have also testified as an expert regarding control of storm water runoff from housing developments, gas and oil well drilling operations, and pipeline construction activities. These cases involved regulations and standards related to mine safety and health, storm water runoff and stability of earth and rock fill structures that I had a role in writing during my earlier career with the Office of Surface Mining and the Mine Safety and Health Administration. I have testified in federal district courts regarding surface and underground mine safety standards and standards regarding landslides and storm water runoff damage from oil and gas drilling operations that caused damage to downstream residents. I have testified in federal and state courts in cases involving mine ventilation, roof and rib control, surface and underground haulage, equipment safety standards, and supervisory standards related to mins safety and health. I have conducted investigations of mining accidents in coal mines and metal/non-metal mines and related mineral processing plants and tailings areas. I wrote reports detailing the root causes of the accidents and made recommendations for improvement of the mine operations regarding health, safety, and the environment. I have been recognized as an expert in mining safety and health and the mining environment at academic conferences examining the mining industry.
Read Less
Jenco Foundation Speech
My Resume
and#8203;

Thank you very much for inviting me to be with you tonight. I am humbled by this honor you have given to me in the name of Father Lawrence Martin Jenco. I was recently reading an interview with Father Jenco, published in 1991 in Vision magazine. In it, he said, "The concept of service is very much a part of my understanding of priesthood." In thinking about this sentence, I remembered a conversation with Sam Farley, a former coal miner from West Virginia who said, "The most dangerous thing you can do in West Virginia is to do your job."

My own job began in November 1968 at the Farmington Mine near Fairmont, West Virginia, where 78 miners died in a methane gas explosion. I had worked the summer before the explosion in that mine as an engineer trainee, so the deaths of those men was a devastating experience for me. In response to that disaster, Congress enacted the Coal Mine Health and Safety Act of 1969, which became the foundation for mine worker health and safety for the next 35 years. I did dedicate my life at that time to doing anything that I could in my career to improve working conditions and living conditions for miners and their families in the Appalachian coalfields. Later, in 1972, I went to Buffalo Creek in Logan County, West Virginia where a coal waste dam had failed around breakfast time on February 26. The dam failure sent 132 million gallons of black sludge down the narrow valley, killing 125 men, women and children and destroying homes in 17 communities. Some communities were literally swept away, never to be rebuilt. I spent the spring and summer of 1972 interviewing survivors and writing an engineering report regarding the cause of the dam failure. I'll never forget the faces or the voices of those people and the suffering they endured.

For many years, I worked in the hollows and mountains of West Virginia, Eastern Kentucky, Virginia and southeastern Ohio doing what I could to rectify some of the damage being caused by mining operations to the people and the environment of those regions.

More recently, I was asked to be part of the investigation of the Martin County, Kentucky Coal Slurry Spill, which took place in October of 2000. The conflicts involved in that investigation have been well documented by the press and even on national television. My only purpose in raising the alarm about this investigation as I did was to make certain that the mining company and the agencies responsible for enforcing mine health and safety and environmental laws be held accountable for their failure to do so. More than 100 miles of stream were polluted by the Martin County Coal Slurry spill. All life forms in and along the streams and rivers were obliterated. Thousands of people were affected. When I objected to weakened investigation reports and less than appropriate enforcement actions, I was immediately attacked by administrators in the Labor Department appointed by the Bush administration. They tried to fire me, but failed because of the public uproar. Again, I am reminded of another quote from Father Jenco.

"When we talk about religious life, we have to remember that it's a vowed life. Religious life gives you a support system to live those vows - brothers and sisters to sustain and affirm you on your good and bad days, on your mountains and in your marketplaces. Religious community give you the support to help you on your pilgrimage."
And believe me, I have been sustained by my brothers and sisters in the communities of Kentucky and West Virginia and Ohio. The most important person in all of this has been my wife Nancy Adams, whose love and steadfastness have kept me alive. She believes working for the common good, in doing work that will raise people up so that they might fulfill their potential, and that by our collective efforts, we shall be able to improve the plight of our communities.
There have been so many others in the mountains who have offered unwavering support and who continue to believe that a better world is possible: Vivian Stockman and Janet Fout of the Ohio Valley Environmental Coalition, members of the Coal River Mountain Watch, the West Virginia Environmental Council, the Sierra Club, Kentuckians for the Commonwealth, the United Mine Workers of America, to name but a few. The public support for my stance against a whitewash of the Martin County spill was overwhelming and eventually the Bush administration had to back down on its efforts to fire me.

The fact remains, however, that Massey Energy, the company responsible for the spill, and which has the sorriest environmental record in Appalachia and a terrible mine health and safety record, has gotten away with its negligence because the corporate executives have direct access and influence with top officials of the Mine Safety and Health Administration and other government agencies with authority over mining operations.

Massey Energy contributed $500,000 to the National Republican Senatorial Committee while it was being investigated for the Martin County Coal Slurry Spill.

I could go on. It is better for me to say simply that from my experience and from the experience of others who have spoken publicly, that the Bush Administration is the most corrupt, lawless, and dangerous government that the country has ever seen. In my experience, I have seen the most callous disregard for the welfare of workers and their families that I have witnessed in my 36 years of work in the coalfields of Appalachia.

The people of the Appalachian coal mining regions are being confronted daily with life-threatening situations such as landslides and flooding that is caused by mountaintop removal operations. They have no control over this situation and few options to escape. Father Jenco, in the Vision interview, addressed this feeling of not having any control over his life while in captivity. "I remember being chained to a radiator in my first prison. I had the sense of being an animal because I had no control of my life. They would feed me off the floor. I was telling God, 'Listen, I am not an animal. I am a person of worth, a person of dignity, I'm loved, I'm redeemed, and I have a destiny.' "

And I say to you: the people of my home and my region of Appalachia have enormous worth and dignity. And I love them and will stand by them for as long as I live. In conclusion, I leave you with the words of Father Jenco: "Going to Mass on Sunday is not an obligation - it's a love affair. That love affair takes you out on the streets. It takes you to the room that you share with your buddy, to share your kindness and your gentleness. There are all kinds of ways to carrying on a love affair with the world." Thank you again for this extraordinary honor. And thank you especially to Sharon Hatfield, Jack Wright, and Terry Anderson.